I vaguely thought about going up to La Casa del Arbol for the sunrise, but no bus goes that early, the hike is apparently three hours up, and a taxi $10, all of which were good excuses for my sleep deprived self to stay in bed.

Graham and I met at a cafe and walked to the bus stop. I hadn’t quite realised that the decrease in elevation would mean that it would all of a sudden be hot, so I was steadily losing layers as the day went on, and sitting on the bus for ten minutes before it departed was painful. $1 took us the entire way to La Casa del Arbol, though I wasn’t super excited to be on another large bus going around sharp curves!

There were actually multiple swings at the top. This was, after the Quilotoa Loop, the thing I was most excited to see in Ecuador, and it didn’t disappoint. There was a line for the photogenic one, which we waited in. This was also the one time I actually cared about getting a photo of myself, so I was glad to have made extra friends on the bus who were happy to oblige me.

The other swings were really just as magical, if not as photogenic–the experience of soaring hundreds of feet above the forest with my feet pointing straight towards mist was outstanding. I don’t think I’ll ever feel as close to flying. I could have spent a few hours up there happily, but the buses only came at 1 or 4, so we took the earlier one.

We all split up for lunch with plans to meet back at the Bridge. I capitalise that bridge since it merits it! I, of course, found a chocolate cafe where I had a tostado con jamon y queso and more hot chocolate, and happily read my book for a while. With a little bit of remaining time, I saw all I really needed to see of the town of Baños. There are lots of candy makers pulling taffy, which was quite excellent to watch, and a lovely old church.

Regrouping at the bridge, there was a lot of nervous energy between the four of us. We linked up with a group from my hostel as well. For $20, three Ecuadorian men were gearing people up and essentially throwing them off the bridge. I wanted to see someone else go before I did to be sure what I was getting myself into. It wasn’t bungee jumping, apparently, since the swinging was like a pendulum.

My friend went in front of me, and I wanted to get it over and done with, so I handed my friend my backpack and stepped on up. I didn’t think it was much scarier than cliff jumping, but I knew that I always have trouble with the initial leap, so I think I was more scared of being scared and not moving than of actually falling. The guide did some trust falls to show me that I just needed to fall, and then pulled me up onto the railing.

Standing up on that tiny ledge with the wind blowing madly, I felt like I would be blown away. I asked if I should jump or fall, and he shrugged at me–I could do whichever I wanted. I decided I would jump. So on three, I bent my legs and prepared–just to be pushed a second before I actually had the momentum going. As such, I whipped my neck at a weird angle, and was more concerned about righting myself than falling during the initial descent.

Swinging back and forth there wasn’t as fun as the swing, but was still massively cool, and I enjoyed being gently lowered to the ground before a pretty steep climb back up to remove my gear.

We had become invested in the group of other people from my hostel, and ended up spending almost two hours at the bridge coercing them all into taking their turn. It was a fun sense of camaraderie, to be encouraging people to do something that defies natural instincts. I think one girl who took at least half an hour and almost gave up was the most brave of us all; it wasn’t particularly brave of me to jump because I wasn’t very scared, but she had real guts.

I had dinner with two of the girls at a little cafe that served delicious empanadas. A girl who was about four years old brought us our menus and our cheque, and I was delighted to tip her in coins and lollies from my stash of New Zealand Fruit Bursts.

There are baths in Baños–hence the name–but I hadn’t brought a swimsuit with me (or, for that matter, even a bra) and I didn’t want to go enough to borrow someone else’s. Instead, I spent an evening playing card games, and made a friend who would travel with me the next few days. By 10pm, I was grumpy and tired, so I declined all invitations to socialise and went straight to bed!

It didn’t feel like Christmas. Not one single bit. It could have been any other day. But it was a really lovely day nonetheless.

I wish I had had more time in Baños! It was a glorious area, and I would have loved to go canyoning or to further explore the nearby mountains. Next time! 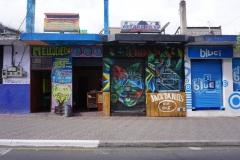 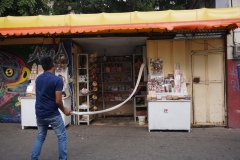 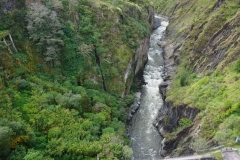 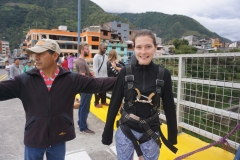 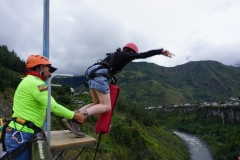 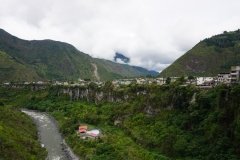 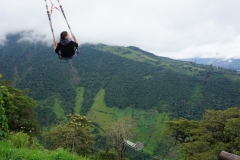 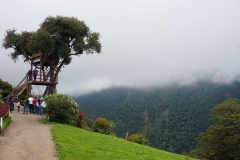 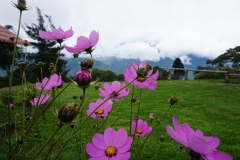 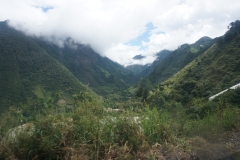 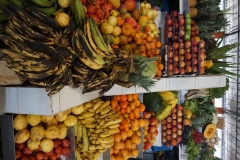 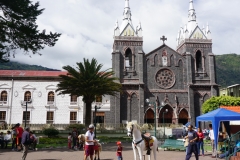