And we were off!

The Quilotoa Loop is essentially a 2-4 day hike through the Andean mountains in the Cotopaxi region of Ecuador. It goes along tiny paths and through small communities, either ending or beginning at the Quilotoa Lagoon. It was one of the things I was most excited to do in Ecuador, and it did not disappoint. Parts of it is on roads, but for the most part, these are tiny trails with little signage. It’s incredibly remote and definitely one of the coolest things I’ve ever done. (I say this as a girl who adores hiking though, so take that with a grain of salt!)

The previous night, I had met a guy from Montreal who was also planning to hike Quilotoa but wasn’t sure where he was starting. I hesitantly invited him along with me, apprehensive about hiking with a complete stranger–though I don’t generally have qualms travelling with people I’ve just met, I had been looking forward to my hike as a time to be completely alone. However, Kevin is super cool and walks at a reasonable speed, so I ended up really enjoying his company.

We took the 7AM bus out of Baños headed towards Quito via Latacunga ($2.50). It dropped us off in the middle of the highway, where we promptly got on a local bus heading into the city of Latacunga (about $0.50.) I was glad I’d asked directions at the hostel, because there were many buses departing from there and it was quite chaotic.

Most people start the Quilotoa loop in Isinlivi, but you can also start from Sigchos, which adds another 3-4 hours or another 15km/9.5 miles. I had a reservation at Llullu Llama for that night, but wanted to completely maximize the hiking, so I thought it was the best decision to add that day–and I’m glad I did.

I was travelling with only my daypack, but Kevin had a proper backpack. We went to the first hotel we saw and asked there if he could leave his pack. There were already two other packs, so obviously it was common, and they charged him $5 for three-four nights. If you have valuables, I wouldn’t recommend this since unlike the hostels I’d read about, they didn’t lock it up; however, they did assure us that someone was always at the reception desk and there would be no problem.

Poor Kevin was beginning to get a taste of my antsiness about time, and we sped walked the two blocks to the station, managing to catch the 9:30 bus to Sigchos with more than a handful of minutes to spare. (This blog had accurate bus times as of December!) This was another sketchy bus ride along windy mountain roads, which I don’t think I’ll ever have a taste of, and I was quite glad to get off finally in the tiny, tiny town of Sigchos.

We walked around for a bit, but at just before noon, not much was open. We ate lunch at a small restaurant and set off out of town at just about 12:30PM. It was misty out but the green valley to our left was vibrant and stunning, and I quickly felt my hiker’s high coming on. Though I hadn’t experienced any elevation sickness prior, I did comment at one point to Kevin on how heavy my breathing was for how normal of a pace we were walking at!

For a while, we were doing pretty well. I had been sent instructions for the day from Llullu Llama over WhatsApp, so we were following those in conjunction with Maps.Me on my phone, but of course, I grew cocky and as soon as I stopped checking it every two minutes, we missed a tiny turnoff and came to a junction. I had a feeling something wasn’t right since we were off the map, but we decided to continue forward, only to run into a farmer a few minutes later. He looked hesitant, so I greeted him brightly, and he was kind of like “Uh, are you going to Isinlivi? ‘Cause you’re going the wrong way.” He explained to us the turn-off we had missed, and I repeated what he said to ensure I was comprehending.

It turned out that on my directions from the hostel had even a picture of this turn off, so once we had our eyes peeled, we quickly found it and trotted off downhill into the canyon. We walked in circles around a farm for a while, thinking that we had missed a turn off when we hadn’t, and then after finding that turn off, promptly walked in the wrong direction until another friendly farmer asked us where we wanted to go and informed us we weren’t on the path.

Once we started going uphill, it started pouring, so I was quickly soaked with sweat underneath my raincoat and rain on top! It was warm enough not to be miserable though, and once we made it to the top of the other side of the canyon, we hit the road and knew we were close to Isinlivi.

Isinlivi was celebrating a festival of some sort that had people out under the rain and a full mariachi band playing for a few people to dance to. There were blow-up jump houses, ping pong tables under cover, and a giant ring where bull fights were going on, something that was intriguing to watch but that I also found very sad–the poor bulls were having no fun whatsoever, and didn’t want to be out in the muddy rain. Poor bulls.

Every travel blog out there says amazing things about Llullu Llama, and for good reason. I don’t think it was the best hostel I’ve ever stayed in, but it was definitely lovely and in an absolutely gorgeous location. I had booked ahead of time, and they upgraded me to a super-simple room which was essentially half-dorm and half-private, with three walls and a curtain–really, the ideal hostel situation for me. The food was decent and they had an endless supply of tea, which I liked. What surprised me was that many of the people we met that night would be travelling with us for the next two. 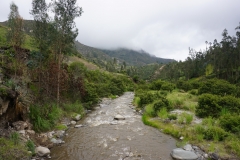 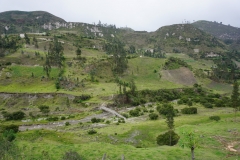 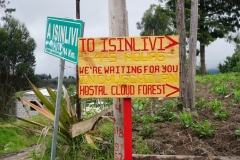 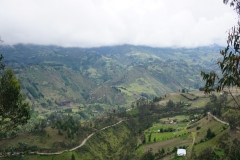 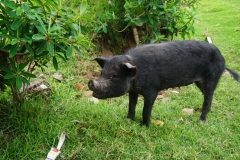 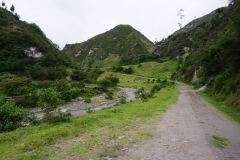 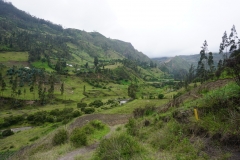 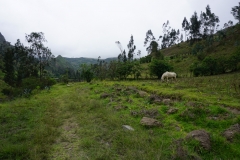